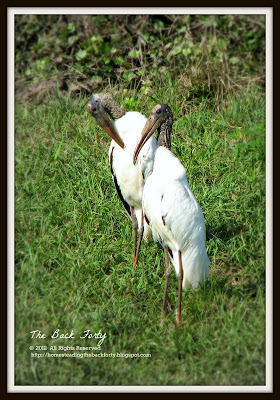 (clicking on pics will enlarge)

I had never seen a wood stork before moving to Florida.  They are not your average waterbird, either.  Oddly ugly in contrast to the slender, plumed great egrets, their wrinkled heads seem nearly prehistoric, like a pterodactyl head stuck on a heron's body.  They are also surprisingly large, which can be startling the first time you're approached by a friendly one in your yard.  Most of the time, though, as with the wood storks in these pictures, they are wary of humans and like to keep their distance. They look gawky and awkward, but their wingspan is awe-inspiring and when they do take to the skies they are grace on the wing. 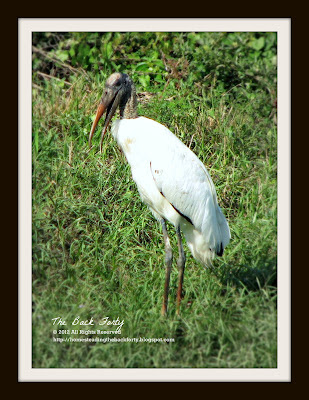 Our first home here was a small duplex in an older neighborhood, and among the tamer sorts of birds, there were some "regulars"...great egrets and wood storks...who made the rounds of the front doors looking for handouts.  There are now laws on the books about not feeding native wildlife, and whether they were in force back then I'm not sure, but the neighbors would often leave an opened can of tuna or other fish snack on the doorstep for the wandering beggars, and they would tolerate being watched at close range, mere feet (or even inches) away. 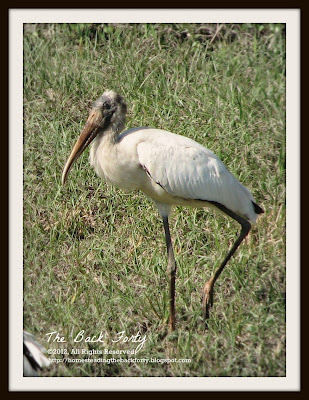 A couple mornings ago, we awoke to the noise of large machinery being operated in the backyard along the swale.  It was time again for the digging out of the overgrowth to allow for better drainage, and the heavy equipment dug a deeper trench, piled the scraped-away cattails and other water plants up on the surrounding banks, and left a lengthening strip of newly-exposed mud down the center...a wetland bird's feast!   Oblivious to the noise and heavy machinery, a mixed group of wading birds followed at close range, snapping up the frogs, snakes and other hidden critters as fast as their beaks could grab them. 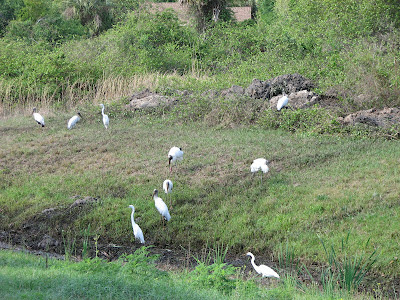 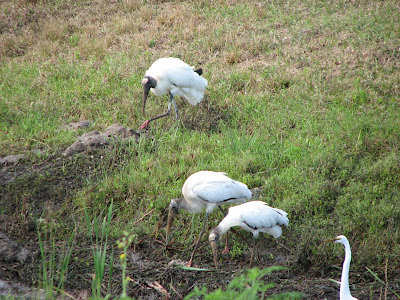 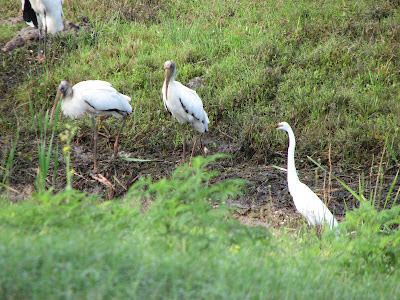 For more reading about wood storks you can start here

What's lurking in your backyard?  I'd love to see your pictures!

:)  Robbyn
Posted from the wayward keyboard of Robbyn at 12:48 PM No comments:

Free Power for All, Free From the Grid?

Do you enjoy the TED talks? This one grabbed my attention...Justin Hall-Tipping: Freeing energy from the grid. I love it when people think outside the box...or beyond "normal"


Posted from the wayward keyboard of Robbyn at 5:56 PM 1 comment: