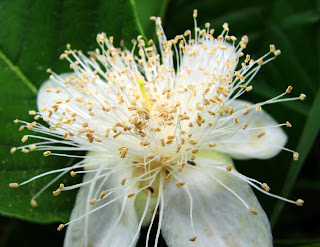 (Can click on pics to enlarge)
I can't believe how fast August came and went!  There's about a week's delay in these pics.  We got one...uno...and not any more...blooms on one of the two guava trees.  That's a first!  The two trees were the only survivors of several we've planted the last few years, small ones.  This year may be different, as there was no partial shade available on that lot until the moringas this year came back much fuller due to last year's heavy pruning.  The moringas die back in the winter, but their foliage is timely for acting as nurse trees to the smaller trees around them, a mixture of types.  The winter frosts are more dangerous for the plants than the direct sun, most years.

I found that guava leaves are used as a medicinal tea in some parts of the world.  I've tried them twice, but don't want to gather too many leaves at this stage while the two trees are so young. 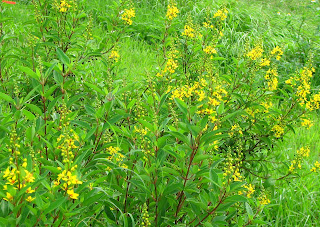 It's hard to get a decent picture of the thryallis.  It is very heat tolerant and just goes to town when other plants are struggling.  It's got a nice bushing habit but also looks somewhat delicate despite its toughness.  Its yellow panicles are so sunny in the landscape, a wash of yellow against green.  The plant has traditional uses in places such as Mexico, said to be effective as a respiratory tonic, but since the information is so scarce at this point and I can't find much to go on as far as how to use it safely, we'll just enjoy it in the meantime as a new favorite on our little suburban 'stead.  A friend nearby assures us it is easy to propagate from branch cuttings planted into good soil into the ground.  We'll likely test this theory when the weather is reliably in the mid to lower eighties instead of nineties.  I would love to see this naturalized nearly everywhere.  It looks to be completely disease-free and really really hardy even with big weather fluctuations. 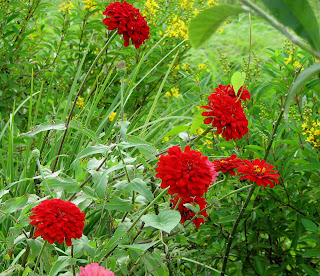 The zinnias were planted as an aside this spring, not even from seed (gasp!)...ha :)  I had succumbed to the siren song of the garden center sometime in April when armed with some birthday money, and one or two little trays of them made their way in with some other things.  I had the idea of mixing them among the tomatoes and some other plants as a trap crop and to attract pollinators, and simply for beauty.  They sure do take a beating.  Something has been chewing on their leaves and I stopped deadheading them sometime in July, but they just keep getting taller, spreading a bit since the rains, and punctuating the trees, bushes...and weeds, ha...with brilliant color, mostly red and salmon.  They are such game plants and so delightful, we'll save these seeds and replant next year! 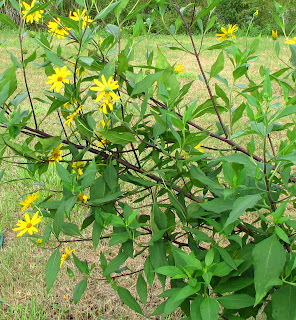 This is our first year to plant Jerusalem artichokes.  I ordered a small bag of the corms (is that the right term?), but later than suggested as the ideal planting time.  We planted some right away, but made the mistake of holding onto the others for later, not knowing they're best planted before the tubers shrink and dry out some.  I had sliced the tubers into smaller pieces, and we planted them at the bases of some of the moringas.  Of all that we planted out, the ones that came up are the few we planted first before the tubers dried out.   They came up with green leaves, growing taller and taller before finally blooming here in the past couple of weeks.  What a beautiful natural look they add!  The yellow glows in the shade of the moringas.  The plants could use staking, but at this point we're letting them lean since the stalks look really sturdy.  If they seem to need it, we'll probably go ahead and stake them right to the growing moringa plants, since the moringa trunks are more like rigid stalks than actual trunks. 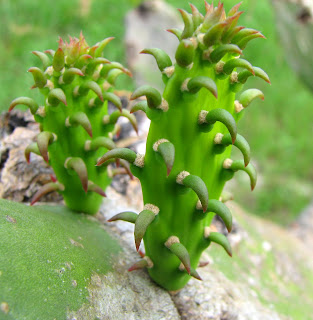 I've become a little infatuated with the nopal cactus.  That's odd for me, because I don't really lean towards succulents or arid-area plants (at least in the past).  But they seem to do magical things overnight.  The huge nopal plant we chopped into plant-able pieces (neighbor was needing the plant removed and it weighed a few hundred pounds and was bigger than our truck bed would fit!) are simply planted in the least fertile soil on our lot next door in an area where nothing else will thrive.  These plants get HUGE down here in Florida, with some of them in the neighborhoods exceeding the roofline of the nearby homes, tumbling in a profusion around mailboxes, or just standing like single, many-armed soldiers in places nothing else will grow.  The pads are edible and have beneficial nutriotional and medicinal qualities, according to those who grow them.  We have found that the plant is basically spineless with the exception of a few fine hair-like spines that grow on the youngest pads...as a protection from being eaten as a snack by deer?...which is why they should be handled with gloves on and scraped well with a knife before snacking on them ourselves.  Ask me...my fingers are proof of the few nearly-invisible needles on the baby pads...I've had several in my fingers and they sting, but are easily removed.  When the pads are prepared (surfaces scraped with a sharp knife and rinsed well, with gloves on), the young pads are...DELICIOUS!!  They are like the mildest lemony cucumbers, without the "burp-back" quality some cucumbers have.  In fact, they are hard to describe.  They have a (for lack of a better word) slimy quality cucumbers don't have, but when rinsed, the young pads cut into slim strips and refrigerated are just some of the best raw things around to munch on, put into a salsa, or include with a salad.  Pico de gallo, anyone?  LOVE the mild lemon flavor!

This picture shows the new baby pads that have grown on the old pieces of cactus we planted only weeks ago.  They seem to appear overnight, and really REALLY mature quickly! 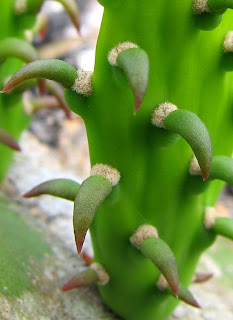 These succulent little fleshy protrusions remain on the pad as the pad grows wider and larger, until the pad is big enough that the pointy things here will appear, when mature, as mere bumps on the mature pad.  I love this tiny stage of growth, the first beginnings, when these little many-armed baby pads appear from little dents in the big "mama" plant.  Look at the "fuzz" at the base of the little spikes...so fascinating :) 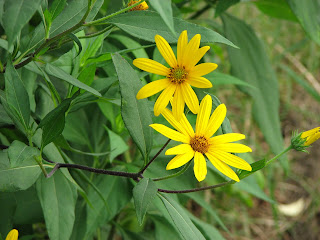 Another gratuitous shot of the Jerusalem artichoke.  They have the cheeriness of the sunflower and a graceful foliage. 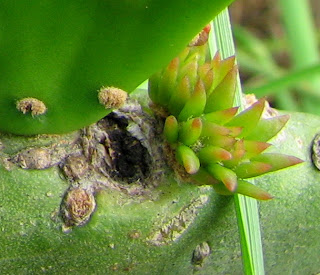 This is a shot of the VERY first beginnings of a new nopal cactus pad, growing from what appear to be injuries to the old plant, or little scabby fibrous areas.  Were these little dry brown areas originally succulent little points in their youth, drying out later as the plant expanded and weathered?  These little fingers of succulent here are a single pad in its infancy, soon to show itself grown into a firmly attached pad all its own.  To harvest when they do become pads of 8 to 10 inches, they can be snapped from the plant very simply.  With gloves on, just in case :) 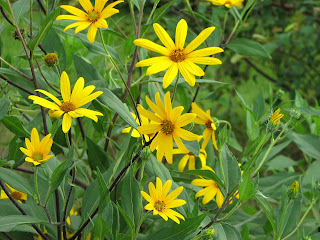 More friendly Jerusalem artichokes.  Some folks think of them as too hardy, almost invasive.  But we really are going for a naturalized and casual mixed planting of trees, shrubs, natives, perennials, and planting other annual things among them.  Anything that prides itself on being a survivor and also yields edible food or treats is a keeper for us.

I'll give a more comprehensive update soon.  Jack had surprise success in burying milkweed fluff (with the seeds, ha) in a bucket just to see if they would germinate, and now he has about a hundred all jammed together to transplant.

We have anything BUT a showcase garden.  In fact, our plants are naturalized into what others might think of as one continual growing mess...ha...but it provides such joy for us every day as the seasons change and the droughts and the rains come and go.  We added some bird feeders throughout, and it's our favorite entertainment to see the insects and birds and animals all bustling about in the little jungle.  The plants seem to have personalities of their own.  And the butterflies crowd to the chaya plants.  But more on that later!

What's making you smile and take notice at your place?
Posted from the wayward keyboard of Robbyn at 9:04 PM 2 comments: