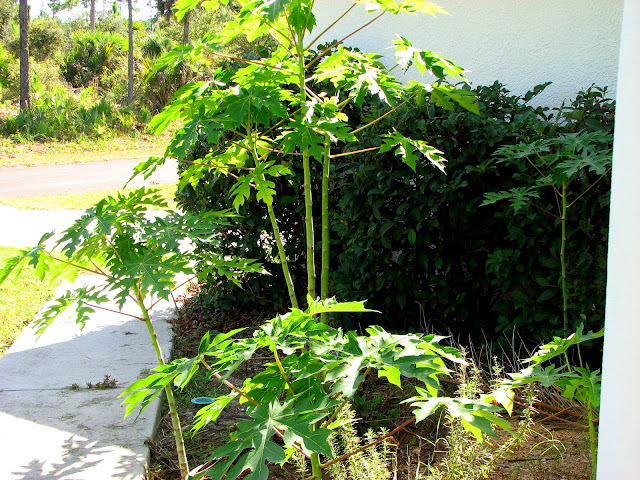 ....from our home to yours!   Whatever your celebration looks like, we hope it's full of contentment and a break from the usual workweek, and gratefulness.  We are so grateful for you!!

Our celebration is later this evening, just the two of us...we're having a delayed T-giving next weekend with friends who are currently out of the country, due back in few days.   But I have already prepared the fatted turkey for tonight, and we'll have a scaled down feast and relaxation.  Happy Thanksgiving to you and yours, and bon appetit!
Posted from the wayward keyboard of Robbyn at 9:45 AM 3 comments:

The pauses here have been getting longer and longer.   I still have things I'd like to write, but am a bit blog-weary at the  moment.   I'm not necessarily planning on pulling the plug, but circumstances behind the scenes here continue to delay a major Hope that's been in the works for two years now...setback after setback.   And until it's resolved, it's not anything I can write about, but that's really on my last nerve now, as it has everything to do with what this blog has been about since I began it.

Any thoughts?  For anyone still reading here, thanks for your patience!  I should have some time to write up the Tiny House posts over the holidays.  Something in me has just wanted some prolonged time away from the computer, and it's been a longer run than my past periodic breaks.

Stay or go?   I'd love to hear whatever you have to say on that subject, especially if you've been at this point yourselves...

I hope your Thanksgiving is WONDERFUL and full of feasting, family and friends!   Ours shall be quiet this  year.  I'm slightly bummed but nevertheless will partake in some kitchen therapy and cook up something warm and decadent for the occasion.  Predictably, good food makes me quite happy :) 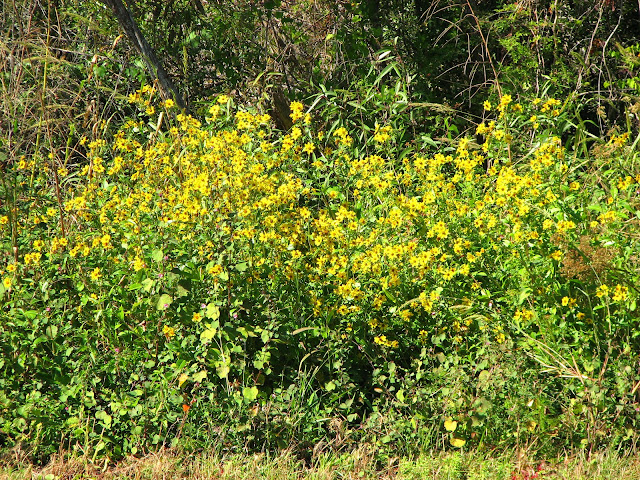 The morning pouring everywhere,  its golden glory on the air
Longfellow
Posted from the wayward keyboard of Robbyn at 3:23 AM No comments: 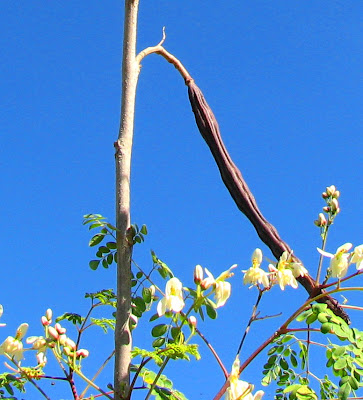 Remember the moringas?  Two of our moringa trees are developing pods!  We're so excited because this means if the pods mature enough before a freeze stunts/kills back the tree, we might be able to harvest seeds...hooray!!
This one tree was the very first one we planted two years ago.  We kept it in a pot far too long and it never developed as well as the ones we planted out after only three or four months of being in pots from seed. 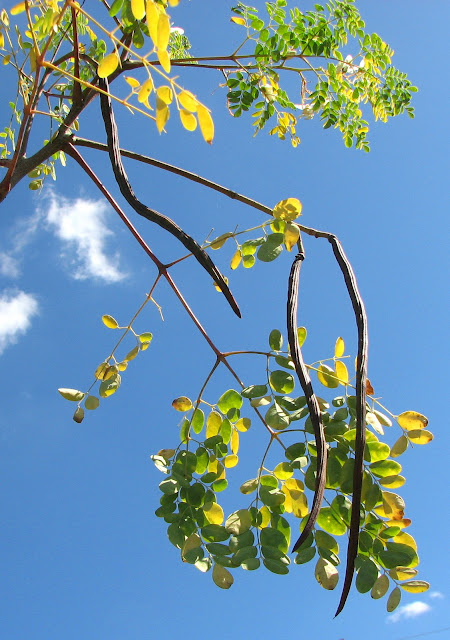 Pods!!   We so hope there are some seeds in there that will make it...they can be expensive to buy.  We've only seen these in pictures so far, so finding them on our trees was new to us.  They are a dull, dark purplish-brown color, and feel rubbery to the touch, resembling a long bean pod.
OK, yes, it feels a bit strange to be posting about a green green growing thing when the rest of the country is expecting some of that freezing white stuff soon...it's strange for me still as a native Tennesseean.  But y'know...I just can't complain.  It was really chilly last week but this week is in the low 80's, so we'll enjoy the warm days and mild nights a bit longer while we can.  And coax these plants just a bit.... 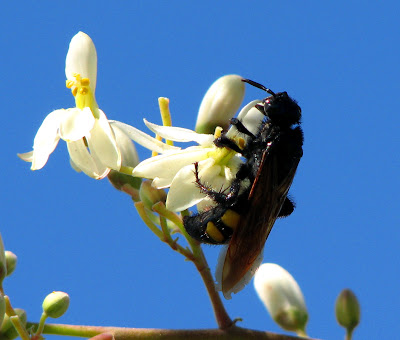 Thanks for your help, pollinators!   Not sure what kind this one is...but there were a lot of these busily working the blooms that are on all the moringa trees right now. 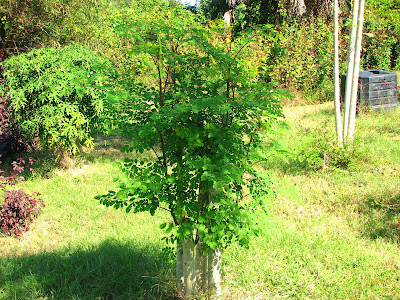 We only kept a couple of the moringas cut short this year.  We're still experimenting.  The other trees are tall not so much by plan but by benign neglect.  This shorter one is an example of how lush the outgrowth is after making consecutive cuttings, and the leaves and branches are more tender than the more mature and  lanky trees, though all the leaves are edible either way. 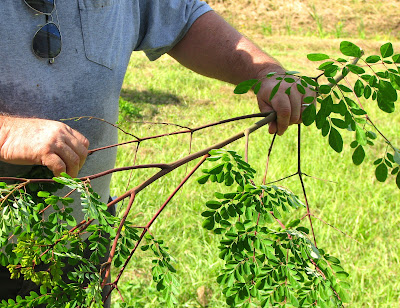 Here, Jack is stripping the small almost fern-like leaves from the stems easily and storing them loosely in a food grade bucket until they are washed soon after and frozen or cooked.  Some day we'll be set up to attempt drying them. 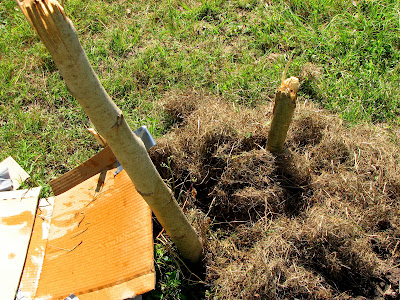 He's experimenting with the cut trunks of the larger trees we've cut back.   Here, he's planted them just cut and bare into the soil, watered in, surrounded by cardboard and then mulched with grass clippings.  Though we don't find much information to that effect, he's had success simply sticking some branches into fertile soil and seeing what happens. 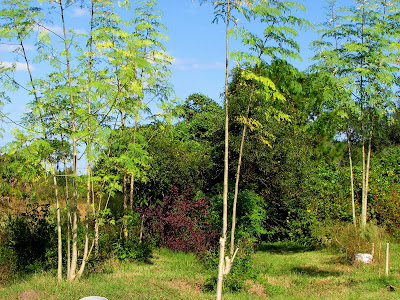 Here's how tall and gangly the plants get if left alone without being cut back.  Their trunks/stalks are very flimsy and can simply be cut with a regular kitchen knife, though they seem to withstand the wind well. 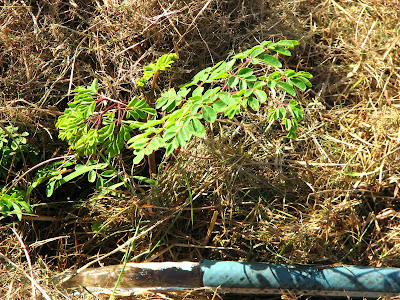 Here's one of Jack's starts from a moringa stick just stuck into the ground and protected.   Some videos we've seen have shown plants no bigger than this planted intensively a few inches apart over large areas, and they're rotationally harvested, regrown, and reharvested (and so on) at about this stage before any of the parts of the stems where the leaves are attached become too woody, so they retain their tender vegetable quality.
I just had to share the pics!
I've been saying I'll get here to the computer to start the Tiny House series any day now, but I have yet to capture all my links from the defunct Dell and transfer them here to the laptop yet so I can post them.  So sorry for the delay!    Thank you for your comments...please let me know what's going on in your corner of the world    :-)
Posted from the wayward keyboard of Robbyn at 2:58 AM 1 comment:

I'm having  computer problems with my main computer, and that's the one on which I have a bunch of neat links I saved on the topic of small houses.  I'm feeling a bit impatient and am determined to try to transfer them to my stand-in laptop, so it'll happen but will take a little more time.  Thank you for your patience!  I can't believe a whole week has gone by and I haven't started the series.

But in the meantime I did lose a little weight...so YAY for that area!

Hope to be back very soon to start the Tiny and Small house set of posts  :)

Have a wonderful weekend, and shabbat shalom!
Posted from the wayward keyboard of Robbyn at 8:24 AM 3 comments: